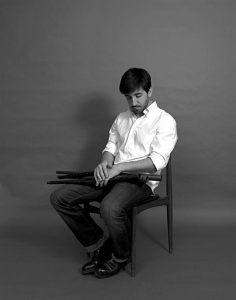 Lambert Colson (08.09.1985) Lambert starts his musical studies in recorder with Francoise Defours and then with Pedro Memeldorff, Bart Coen, Marleen Leicher, Bruce Dickey and Gebhard David ; Graduating in famous institutions such as the Koninklijk Conservatorium Brussel, The Esmuc inBarcelona, theScholaCantorum Basiliensis and the HFK in Bremen. As Both a recorder and a cornetto player, he has been invited to perform with conductors and ensembles such as Scherzi Musicali, Le Poème Harmonique (Vincent Dumestre), Holland Baroque, La Fenice (Jean Tubéry), Pygmalion (Raphaël Pichon), B’rock, Collegium Vocale (Phillipe Herreweghe), Correspondances (Sébastien Daucé), Cappella Meditteranea (Leonardo Garcia Alarcon), Continuum…
He has been running his own artistic projects with his own ensemble InAlto. In the last years, the recordings of InAlto were highly praised and rewarded by the reviewers all around Europe : Diapason d’Or & Diapason D’Or de l’année 2017, Choc de Classica, 5 stars in Rondo Magazin, the choice of the year in both Libération and Le Monde, Joker Crescendo …
As a researcher, he has been invited to write for la pensée de Midi (Actes Sud). As a teacher, he was invited to give lectures and masterclasses in the Fondation Royaumont on various topics such as the history of western music notation, Luther and music in the Holy Roman Empire. Besides participating in various masterclasses, he is now teaching Cornetto and Historical Performance Practice in the Koninklijk Conservatoriumin Brussels as well as in the Haute Ecole demusique in Geneva.
In Addition to his teaching activities, and in a constant will to discover more about performance practice, Lambert Colson is aresearch fellow in the Koninklijk Conservatorium in Brussels since September2017 with a focus on instrument making, trying to identify specific models for specific repertoires in several European museums. This research will be presented as a PhD project in2024.
Unexpected collaborations led him to discover the use of hypnosis within the creation process with the choreographer Catherine Contour. Also interested in developing his musical perspectives on the cornetto, he has worked with contemporary composers such as Zad Moultaka, Fabrice Fitch and Bernard Foccroulle on new compositions, and collaborating with Pop/Rock/Jazz artists such as Shara Worden, Mugison and Efterklang in association with Box collective. Since then, he is been involved in  various improvised music projects in collaboration with An Pierlé, Liesa van der Aa, Emmanuel Baily, Xavier Rogé, Adam Woolf, Franck Vagané, Jon Birdsong etc..